Young Musicians at their Best

HRCP places a balanced emphasis on musical growth as well as personal and social development. When studying in a chamber ensemble, students often build close friendships with the other members of the group while expanding musical independence and skills. The absence of a conductor also allows participants to make their own musical decisions.

HRCP’s year-round program is divided into two semesters of 15 weeks each. Fall Semester begins in early September, and Spring semester starts in early January. Rehearsals are held on Sundays at the Coastal Virginia Unitarian Universalist Church from 9am to 12pm and 1pm to 4pm. Our Summer Camps are two separate week-long workshops held at the end of June and run from 9:30 am to 3:00 pm.

Students are grouped into quartets, quintets, and sextets that perform regularly in public concerts, private parties, and corporate sponsored events. Playing in such small ensembles allows our young musicians to bring their art to a new level, further developing the expertise and confidence to play as soloists. In addition, our Sinfonietta allows our entire complement of musicians to perform together. Typically, this means about a dozen violins, six violas, six cellos, and one string bass, although the exact numbers vary from one concert to the next. This form of larger ensemble playing enhances each musician’s sensitivities to the complexities of solo opportunities within a group performance. In much the same way as excellent jazz, each musician must be intimately aware of what all the other performers are doing from moment to moment. 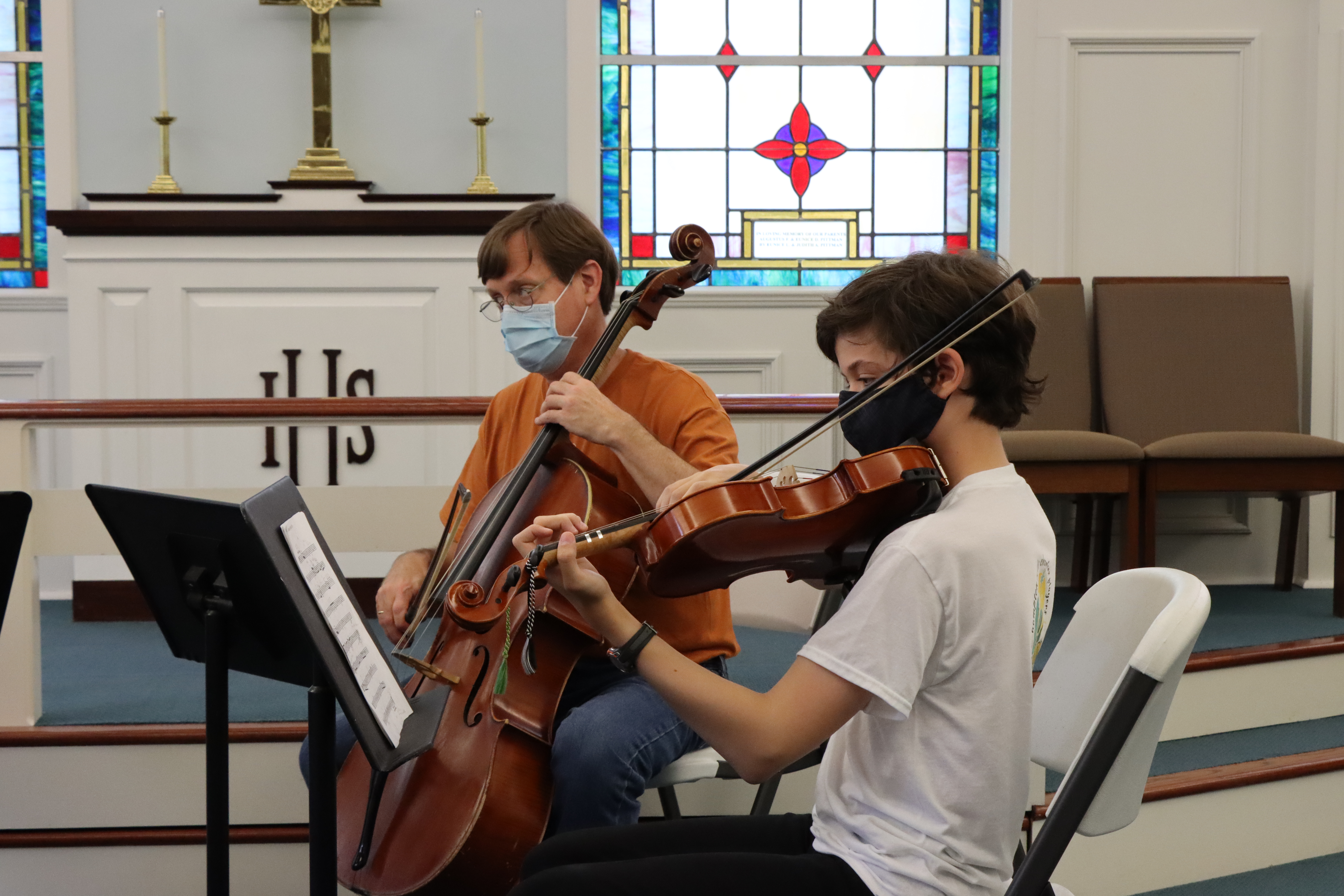 HRCP strongly believes these (and many other) benefits come from the study of chamber music:

Hampton Roads Chamber Players demands a serious commitment to musical performance as well as to fellow musicians. We place a balanced emphasis on musical growth as well as personal and social development. When studying in a chamber ensemble, students often build close friendships with the other members of the group while expanding musical independence and skills. The absence of a conductor also allows participants to make their own musical decisions.

For nearly two decades HRCP has been receiving letters from parents, students, and alumni telling us that summer at HRCP has changed their lives. Students and parents alike describe an increased sense of self-identity, self-worth and leadership aptitude. We are proud of our unique program and our ability to provide a safe and supportive environment where young musicians are nurtured and given the opportunity to explore and express themselves. Please check out some of our students’ thoughts in their own words on our alumni page.

Jorge started his studies as a violinist at the Conservatorio Nacional de Música of Peru, his native country.  Later he received a scholarship to study in Mexico with legendary violinist Henryk Szeryng.  Another scholarship took him to study with Miss Dorothy Delay in the Aspen Music Festival and School. His musical curiosity led him to Europe where he performed as a soloist and a chamber player.

He also occupied different title chairs in various orchestras, such as the Sinfonietta de Roma in Italy, the Royal Opera of Brussels in Belgium, the Mannheim Opera in Germany, and the Madrid Symphony in Spain where he performed as principal and soloist.

He currently lives in the U.S. where he works with the Virginia Symphony and the Virginia Opera.  He is the Artistic Director of the Hampton Roads Chamber Players as well as the international project Traveling Notes, of which he is a founding member.  He also works as a conductor and as a professor at various universities in Virginia.  In his long career, he has had the privilege to play professionally with Leonard Bernstein, Zubin Metha, Lorin Maazel, Itzhak Perlman, Midori, Joshua Bell, Pinchas Zukerman, YoYo Ma, among others.

“In 1962, 13-year-old violinist Pinchas Zukerman was brought to New York from Israel by Isaac Stern. Stern said: ‘Pinchas needs chamber music. No other form of music-making teaches listening at such a high level of awareness,’ said Stern, ‘This is the most important training we can give him.’”  ​

Become a member of the HRCP
organization and donate today!